I read an article yesterday highlighting, as the author pointed out, that employees value benefits more than a raise. Some of the findings were predictable -- the two most important were health insurance and a 401(k) match and they were followed by paid time off. But, just barely trailing those were pension benefits with flexible work hours and the ability to work remotely far behind.

Let's put some numbers behind the ordering:


What I found remarkable about this is that five of those six get constant attention. In today's workplace, however, as compared to one generation ago, pensions get little, if any, attention yet nearly one-third of workers would rather have pensions than a raise.

Why is this the case? Neither the survey nor the article got into any analysis as to the reasons, so I get to way in here entirely unencumbered by nasty things like facts. I get to express my opinions.

Ask a worker what they fear. I think they will tell you that two of their biggest fears are losing their health and outliving their savings. The second, of course, can be mitigated by guaranteed lifetime income.

Workers are beginning to realize that 401(k) plans are exactly what Congress intended them to be -- supplemental tax-favored savings plans. In fact, generating lifetime income from those 401(k)s is beyond what a typical worker is able to do. Their options for doing so, generally speaking, are to self-annuitize (when you run out of money, however, the guarantee goes away) or to purchase an annuity in the free market.

That, too, comes with a problem. While that purchase is easy to do and does come with a lifetime income guarantee, it also comes with overhead costs (insurance company risk mitigation and profits plus the earnings of a broker). Roughly speaking, a retiree may be paying 20% of their savings to others in order to annuitize. That's a high price. Is it worth it? Is that why workers want pensions despite often not really knowing what they are?

Pensions are not for everybody; they're also not for every company. But, this survey strongly suggests that companies that provide pensions may become employers of choice. In the battle for talent, that's really important.

Many companies exited the pension world because the rules made those pensions too cumbersome. But, the rules have gotten better. They've put in writing the legality of plans that many employers wanted to adopt 15 to 20 years ago, but feared doing something largely untried. And, there is bipartisan language floating around in Congress that would make such plans more accessible for more employers.

Designed properly, those plans will check all the boxes for both the employer and the employees. It seems time to take another look.
Posted by John Lowell at 8:09 AM No comments: Links to this post

When the American Academy of Actuaries has no Clothes 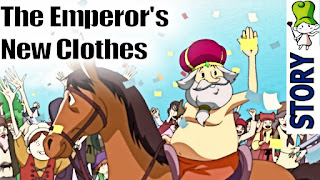 We're all familiar with the Hans Christian Andersen tale, "The Emperor's New Clothes," about two weavers who promise an emperor a new suit of clothes that they say is invisible to those who are unfit for their positions, stupid, or incompetent – while in reality, they make no clothes at all, making everyone believe the clothes are invisible to them. When the emperor parades before his subjects in his new "clothes", no one dares to say that they do not see any suit of clothes on him for fear that they will be seen as stupid. Finally, a child cries out, "But he isn't wearing anything at all!"
Such appears to be the current position of the American Academy of Actuaries. They have opened voting on two amendments to their bylaws which voting will close November 9 just before midnight. Amendment 1 would take away most rights of Members not on the Board of Directors while Amendment 2 would ensure transparency to the processes of the Actuarial Standards Board (paralleling what we see in other professions such as accounting).
Tuesday, a group of 9 Presidents of the Academy (current, future, and 7 former) sent an email to all members of the Academy urging Members to vote in favor of Amendment 1 and against Amendment 2. They preached transparency and independence. They offer neither.
In fact, were Amendment 1 to pass, in order for a member-driven bylaws amendment to have even a chance to be brought to a vote, it would take a petition of 15% of the membership. Think about that for a moment. 15%. Since no member has a distribution list of contact information for Academy members, gathering signatures of 15% of members would be a herculean task, nigh impossible. And, even if 15% were gathered, the Academy Board could by 2/3 vote of Board members refuse to bring such bylaws amendment to a vote of members.
On the other hand, Amendment 2, the supposedly uppity, disruptive Amendment 2, would have its greatest effect by making meetings of the Actuarial Standards Board -- the professional standards setting organization for US actuaries -- open.
Quel dommage.
Meetings of the ASB should be open. They should be open because we are now at the point where members of the Actuarial Standards Board are chosen in significant part by the Academy's Board (actually, they are chosen by a Selection Committee chaired by the Academy President and having 1/3 of its votes from the Academy, but if the proposed SOA-CAS merger takes effect, that 1/3 will increase to 1/2).
The 9 presidents tell us how important this is for the Academy and for the profession. They talk about the independence of the Academy. They talk about the transparency of the Academy. They expect that the masses -- the sheeple -- to chant in agreement.
So, I urge you to vote NO on Amendment 1 and to vote YES on Amendment 2.
Be like the little boy. Tell the 9 presidents. Tell the Academy. Tell them that the Academy wears no clothes.
Posted by John Lowell at 8:09 AM No comments: Links to this post

John Lowell
Consultant and actuary for more than 30 years. johnhlowell@gmail.com